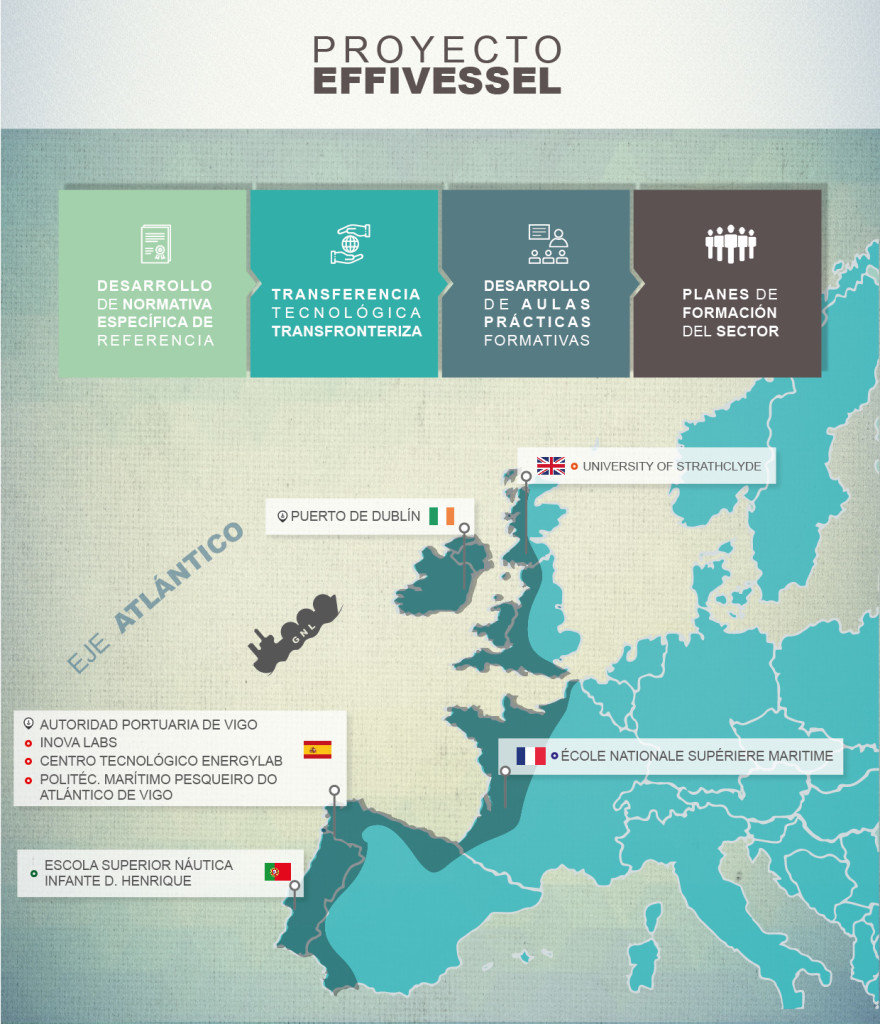 Over the last years the increasingly restrictive environmental policies in the maritime sector (MARPOL, ECAs, SECAs …) and the volatility of conventional fuel prices have triggered initiatives to improve emission levels and energy efficiency in maritime transport. These initiatives include the development and use of new fuels and more efficient propulsion systems that reduce the environmental impact generated by the different activities associated with the maritime sector (Transport, Fishing, Services, etc.) while reducing operating costs.

From the technological point of view, the introduction of new fuels such as Natural Gas (CNG, LNG) and electric propulsion systems are gradually changing the current scenario. An example of this is the new Ro-Ro ship “Auto Eco” from UECC, powered by LNG, which since December 2016 began to berth weekly in the Port of Vigo. Optimization of accumulation systems, compressed and liquefied gas, batteries and the design of the new propulsive plants are the main problems to be addressed. Besides, the lack of supply infrastructures and the lack of information about existing infrastructure are additional barriers.

Historically, the maritime sector has been slower in adapting changes and innovations than other sectors. Technological advance is further hampered by the lack of knowledge and awareness among the legislative bodies at regional, national, and international level. This creates an environment of uncertainty that is particularly problematic given the industry requirement to register and certify all equipment with the maritime classification societies.

Training and educating staff with new equipment and advanced technologies is also complicated by these circumstances since it is unknown which technologies and equipment will be approved or not, and under which regulative conditions. From professional training schools (merchant seafarers, technicians, naval engineers, etc.) to ship-owners, operators and even technical staff from different administrations (inspectors), the inability to acquire practical knowledge in this area is another important barrier.

The Effivessel Project is an initiative to tackle many of these obstacles to new clean solutions in the maritime industry. It is dedicated to the following issues:

In order to make this initiative a reality, this project proposal has been submitted to the European call for proposals entitled “Interreg Atlantic Area 2016”, which is financed by ERDF funds. Effivessel Project partners’ consortium is composed by the following public and private entities originating from 5 European countries of the so-called Atlantic Area:

Additionally, the following entities act as supporting collaborators in the Effivessel project:

Liquefied Natural Gas (LNG): a study on its operations and port security
¿What´s Onshore Power Supply?
The opportunities of blue growth
GRETA, a tool to take care of the environment
Test to find out your company's cicularity level
← Anterior Siguiente →

You can find out more about which cookies we are using or switch them off in settings.

This website uses cookies so that we can provide you with the best user experience possible. Cookie information is stored in your browser and performs functions such as recognising you when you return to our website and helping our team to understand which sections of the website you find most interesting and useful.

Strictly Necessary Cookie should be enabled at all times so that we can save your preferences for cookie settings.

If you disable this cookie, we will not be able to save your preferences. This means that every time you visit this website you will need to enable or disable cookies again.

This website uses Google Analytics to collect anonymous information such as the number of visitors to the site, and the most popular pages.

Please enable Strictly Necessary Cookies first so that we can save your preferences!